Energy Efficiency in the UK - How many Areas are converting to LED Streetlights?

It's increasingly important for councils to take action to reduce the country's carbon footprint. One initiative in the UK aims to increase energy efficiency by converting the nation's streetlights to LED or other energy saving lamps.

LED lights are great for reducing carbon emissions, because they use far less energy than conventional bulbs to produce the same amount of light.

The Lighting Superstore has been investigating the UK's street lighting to measure the progress we're making – and assess how much work is still to be done.

Our experts asked the 100 largest cities and towns in the UK for the number of LED streetlights installed and how much they've invested in LED street lighting in the last five years. 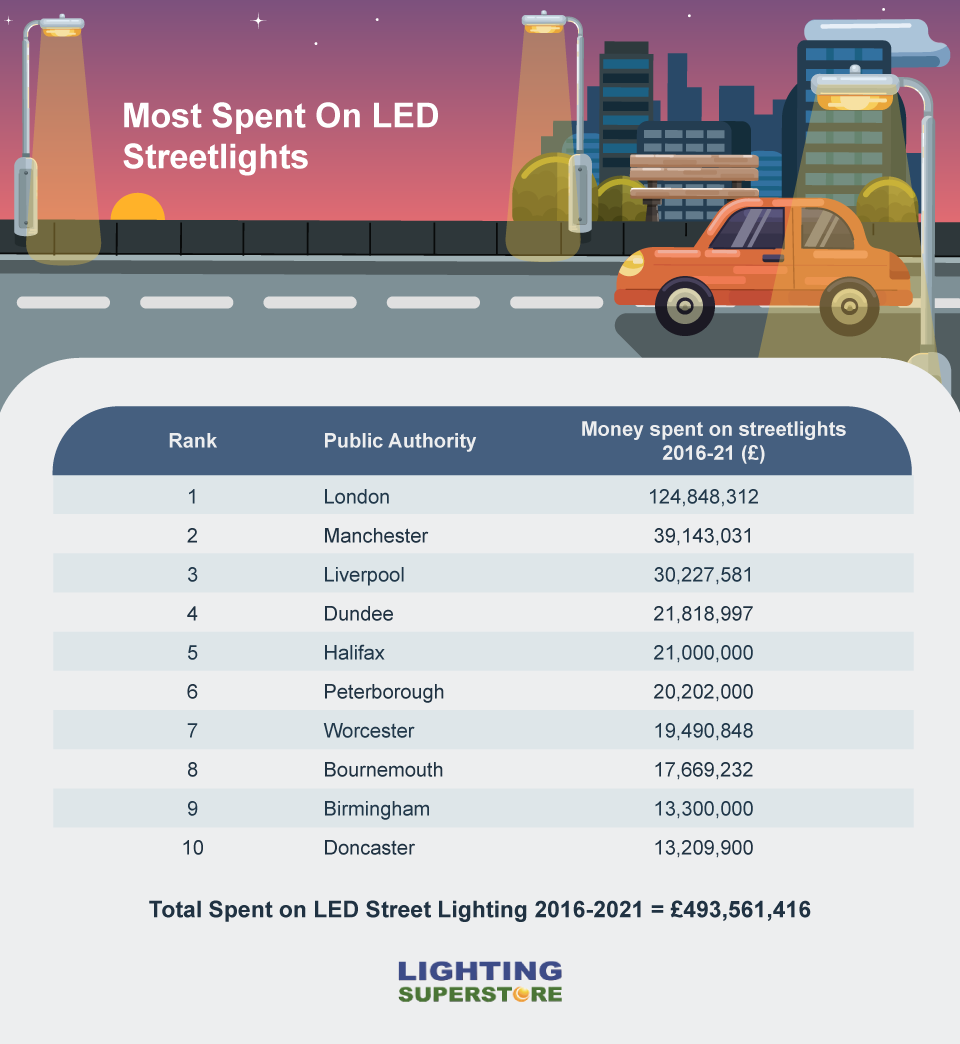 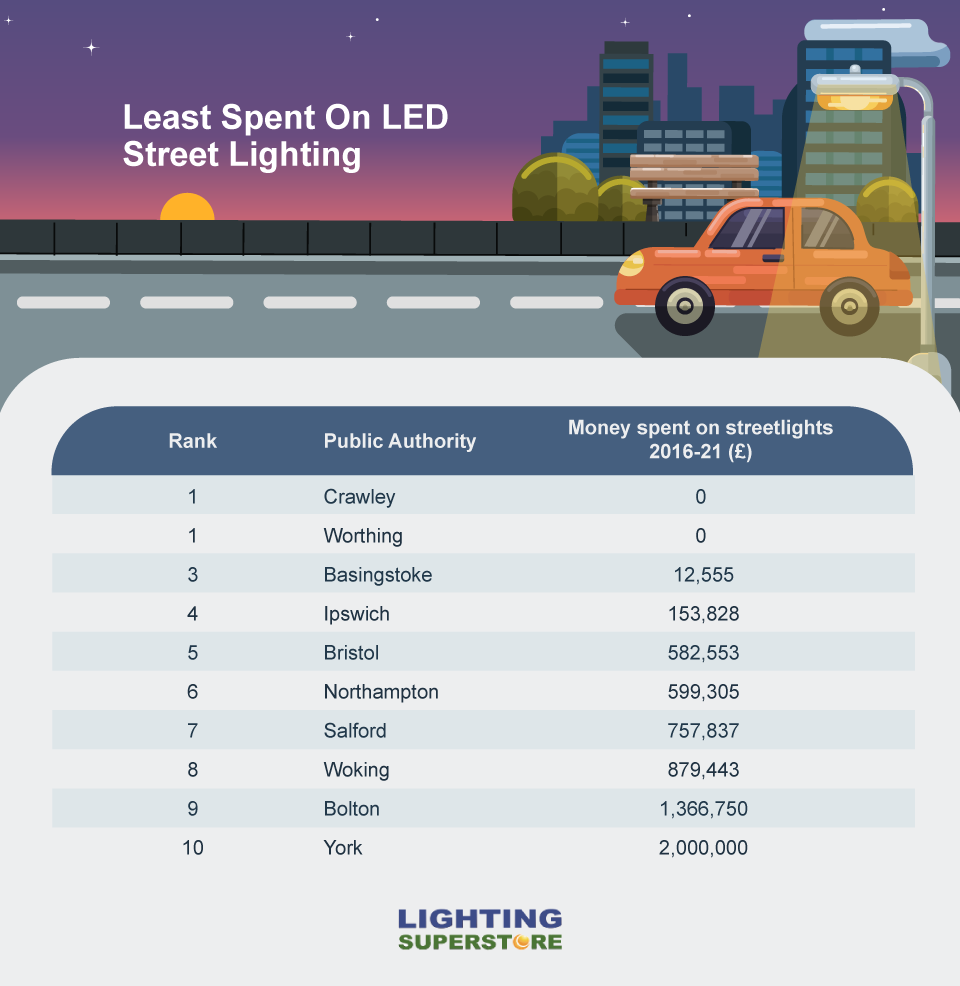 Since 2016, almost half a billion pounds has been spent by UK councils on LED streetlights. That's according to the 61 councils that responded under the Freedom of Information Act.

That means on average, £8m has been invested per council at a rate of £1.6m per year. Of course, this will vary greatly by budget size and council area – the larger the council, the more streetlights need replacing.

Unsurprisingly, London makes up a chunk of the investment with just under £125m. If you exclude London, the average council investment becomes just over £8.5m since 2016.

Out of all the councils who responded, only two areas hadn't invested in LED streetlights since 2016 – Crawley and Worthing. However, West Sussex County Council say they are in the final stages of starting a 4-year, £26.5m scheme to convert streetlights in Worthing and Crawley to LEDs. The scheme will potentially go ahead later in 2021.

As we can gather from Crawley and Worthing's lack of financial investment in the last five years, the two Sussex councils have not installed any LED streetlights in this time. 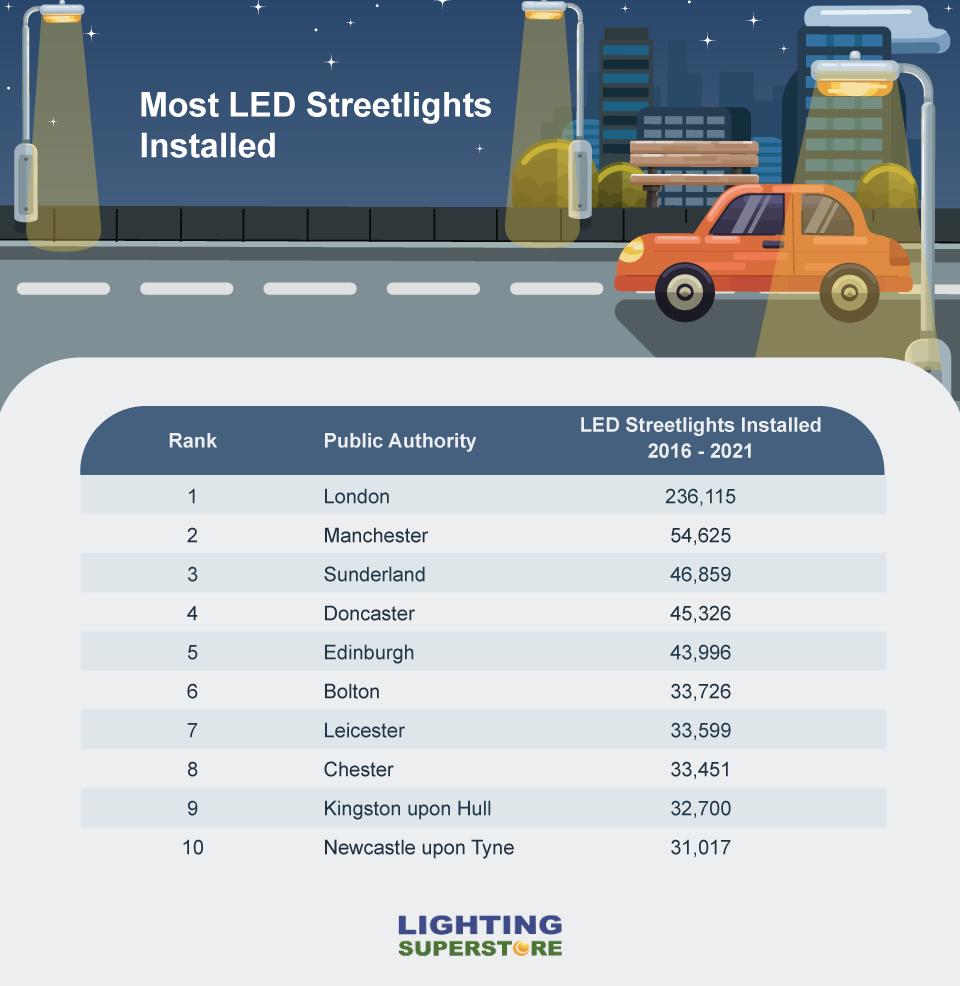 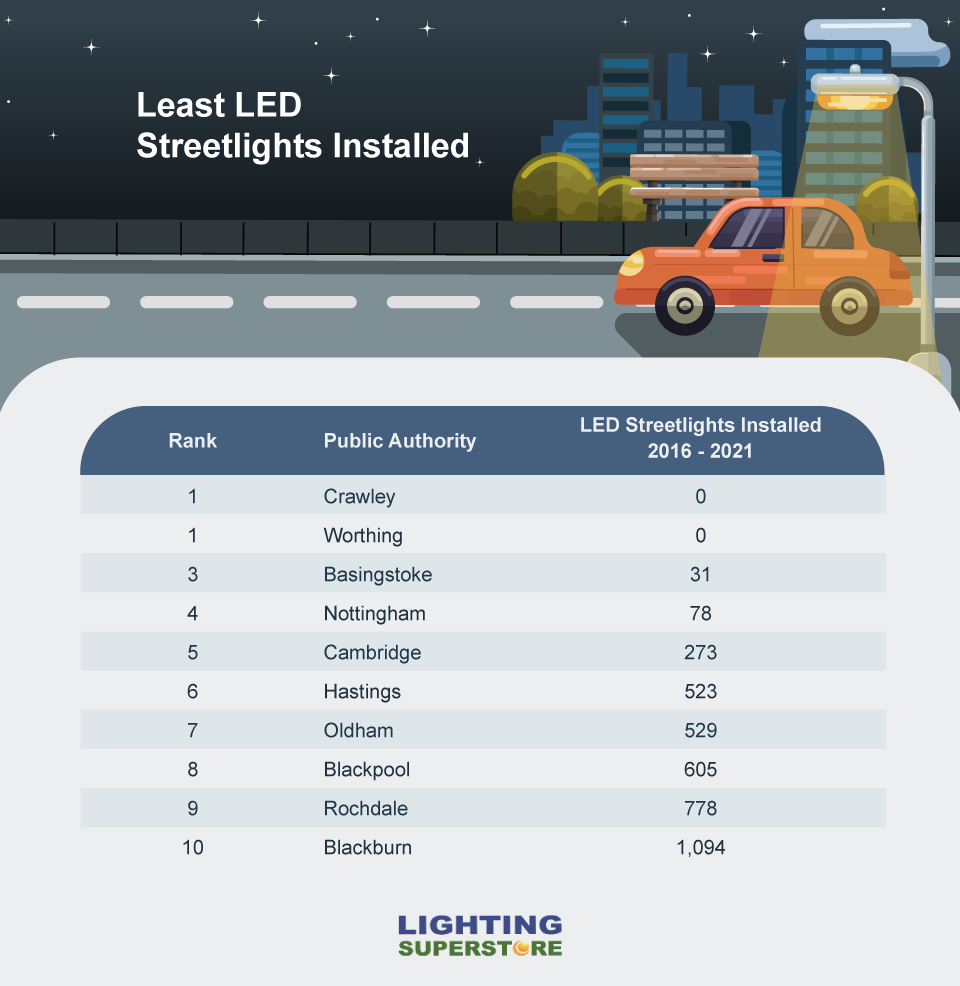 London leads the way, of course, followed by Manchester, with the most LED streetlights changed in the last five years. Among the top ten are other major cities including Edinburgh, Newcastle, and Leicester.

Of London's 32 Boroughs (plus City of London), Barnet installed the most sustainable streelights with 29,472 in the last 5 years.

Estimated Completion Date
So, when will the nation have 100 percent energy efficient street lighting?

Based on the information we gathered, it's estimated every UK street and road will be fully lined with energy efficient lighting by 2035.

London will be last, despite its first-place position – the latest date given by any council was from the Borough of Ealing (January 2035). Even still, five of its boroughs have already achieved a full switch to LEDs, with a further five expected to complete by the end of this year.

Elsewhere, 31 areas expect to complete a switch to LEDs by the end of 2022 – including Manchester, Edinburgh, Peterborough and Portsmouth. Nine areas are using 100 percent LED street lighting already.

Between 2016-21 UK councils have received 3,720 complaints about their streetlights with LED lamps. The most common reasons for complaints are brightness or busted lamps.

Although, there have been cases of LED lights flickering on and off. Complaints were reported earlier this year in Salford and South Gloucestershire. It was revealed this issue was due to a GPS device in some LED streetlights that calculates sunrise and sunset. Most streetlights installed today are photocell-controlled instead, which helps prevent this flickering effect from occurring. 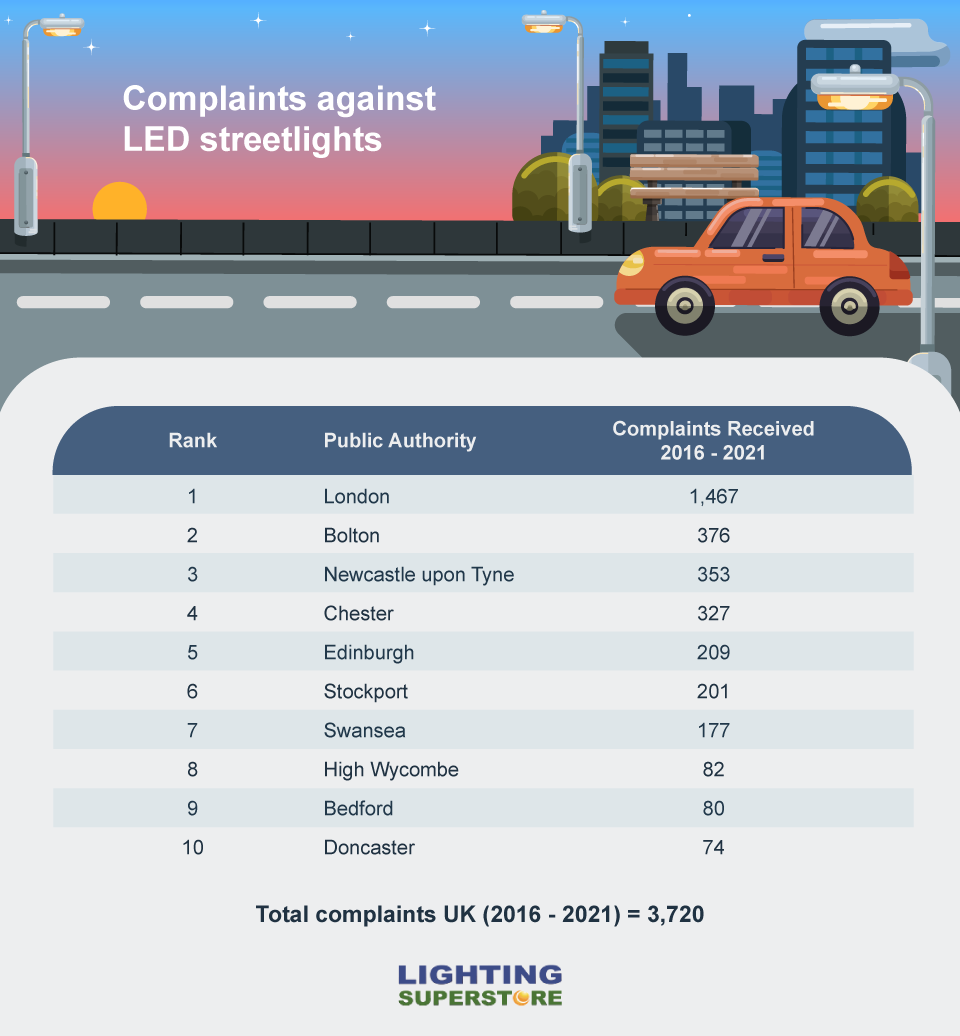 Under the Freedom of Information Act, The Lighting Superstore sent requests to 131 councils - these were the top 100 most populous areas in the UK (including London). This was made up of 99 council areas, plus 32 London Borough councils - which experts combined to give us a whole score for London.

Back to the top
Without JavaScript enabled you won't be able to enjoy all of this website's features.